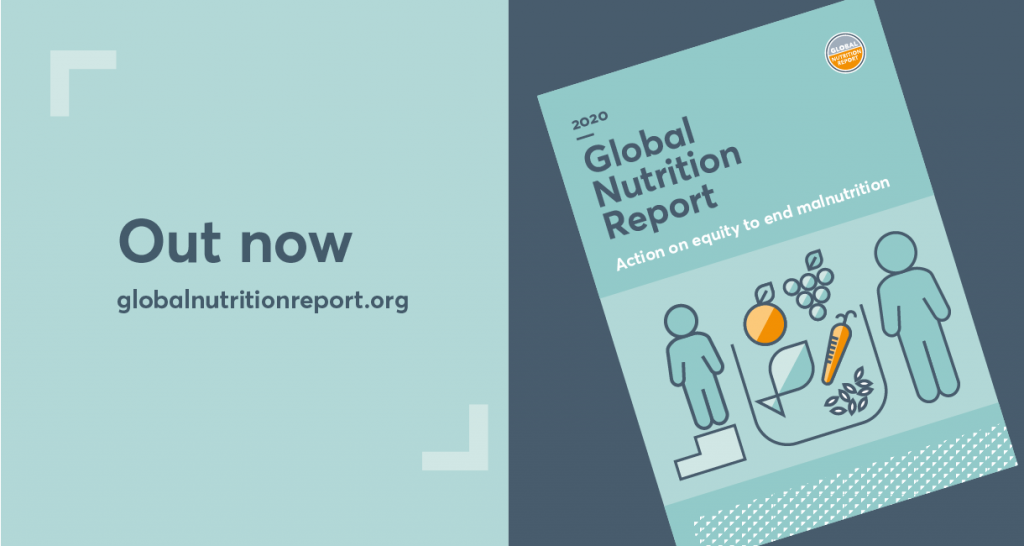 By Will Sharp, Research Intern

Last week saw the launch of the 2020 Global Nutrition Report, the world’s leading independent, in-depth assessment of the state of nutrition across the globe. Tracking the progress made towards 2025 Global Nutrition Targets, the Report’s findings reassert the critical importance of addressing malnutrition in all its forms as a top priority, and provides concrete recommendations on how this can be achieved.

Malnutrition remains a critical global issue, now more than ever

On the one hand, the past decade has seen some gradual improvements in maternal, infant and young child nutrition and diet-related non-communicable diseases (NCDs). However, in a world where one in nine people (820 million people) still experience hunger (with one in five children under five being stunted as a result), while one in three people are overweight or obese, the ‘double burden’ of malnutrition remains a critical global issue. Not only are poor diets the leading cause of death globally, but the economic cost of malnutrition is astronomical: the problems resulting from obesity and overweight, for example, are estimated to cost the world US$1.2 trillion annually by 2025. With its lens focussed on inequity, the Report uncovers many severe inequalities that exist in nutrition outcomes within countries and populations.

This is particularly significant in the context of the Covid-19 pandemic. While the bulk of the Report was finalised before the pandemic swept the globe, the authors were able to highlight how malnutrition represents a “threat multiplier”: weakened immune systems resulting from undernourishment increase an individual’s risk of contracting the virus, while those with obesity and diabetes are more likely to experience its worst outcomes. At the same time, the measures enacted to combat the virus have placed massive strain on an already precarious global food system, putting millions more people in danger. This risks triggering a vicious cycle, ‘multiplying’ the negative effects of the virus.

Choosing one’s diet is not simply a personal decision. In discussing the drivers of malnutrition, the Report pays special attention to the “food environment”, i.e. the context in which consumers make decisions about acquiring, preparing and consuming food. Factors like the physical availability and accessibility of healthy and quality food, its affordability, and the informational environment (including marketing, labelling and nutritional education) shape this context, and therefore affects individuals’ ability to eat healthy and balanced diets in ways outside of their direct control. These are areas where private food and beverage manufacturers exert considerable influence.

For example, a pervasive issue highlighted in the Report is the over-availability, affordability and intense marketing of highly processed foods. While high sales of such foods, which are characterised by high levels of added sugars, trans fats and salt, and being low in fibre and nutrient-density, have long been a feature of high-income countries, a deeply concerning trend is the rapidly growing sales of these foods and drinks in middle- and low-income countries. The Report particularly takes aim at corporate marketing practices, which evidence suggests is “contributing to increasing health disparities” and increasing the burden of malnutrition, especially in lower-income countries and communities. The authors therefore argue “The private food and drink sector has a responsibility both to promote healthy eating and to prevent unhealthy diets under human rights principles.”

While the Report highlights the private sector’s role in contributing to the global state of the malnutrition, it also acknowledges that, as an “essential player in the food supply chain”, its strengths in innovation, problem-solving and marketing can also be positive force if these capabilities can, instead, be applied to healthy foods. The Report also calls on companies to include more transparent labelling, reduce sugar, salt and fat content in their products, fortify them with positive nutrients, and to follow established codes of conduct as much as possible. “Through these approaches, food companies can help to make nutritious foods more accessible to consumers, which in turn can significantly improve diets and health”, they conclude.

How can we expect private companies to take such an approach, and to do so effectively? The Report correctly emphasises the need for “an accountable private sector”. That is, we must ensure that private companies take responsibility for nutrition issues, their commitments are effectively monitored, their positive contributions and best practices are well noted and credited and that  their failings are challenged. The Report calls for stronger government regulation to ensure this. While this is an ideal goal, to expect all governments to introduce well-designed legislation swiftly, stringently and with sufficient capacity to enforce it, is perhaps unrealistic. This is why other, complementary accountability mechanisms are so important, and this is where ATNI comes in. ATNI seeks to achieve this by increasing transparency in global food and beverage companies’ approaches to nutrition.

By independently assessing their nutrition policies and practices on a comprehensive range of areas highlighted in the Report, including healthy product formulation, access and affordability policies, marketing, labelling and nutrition education, among others, we provide reliable, objective and comparable information to drive positive change and competition towards healthier portfolios among companies and for other stakeholders to hold these companies accountable. By shining a light on companies’ shortcomings, while highlighting frontrunners and best practices, our work drives change in the industry. As companies improve their performance in these various criteria, this, in turn, improves the ‘food environment’ for people to pursue healthy diets. Efforts to enhance transparency and accountability in the private sector are therefore crucial ingredients to driving systemic change in the food system, leading to both better diets and improved nutrition outcomes around the world.