The India Spotlight Index assesses companies’ nutrition-related commitments, practices and disclosure. It is organized into three sections: nutrition governance and management; formulating and delivering appropriate, affordable and accessible products; and influencing consumer choice and behavior. The three sections are further divided into seven thematic Categories.
Category C assesses companies' efforts to make their healthy products more affordable and accessible to Indian consumers through their approaches to pricing and distribution. Producing healthier options is necessary to improve consumers' access to nutritious foods and beverages but is insufficient on its own to improve the consumption of healthy products. Therefore, companies must offer healthier products at competitive prices and distribute them widely to reach all consumers in need, especially those who are vulnerable to malnutrition.

To perform well in this category, companies should generally:

And specifically, companies should:

Hindustan Unilever ranks first in the thematic area of affordability and accessibility of healthy products (Category C), followed by Nestlé India and Coca-Cola India. KMF Nandini ranks fourth, along with PepsiCo India, and is the highest scoring India-headquartered company in this Category. Among the companies which were also assessed in 2016, Coca-Cola India has shown the greatest improvement. The company has achieved this by strengthening its commitments and offering non-carbonated, low-sugar beverages (e.g. Aquarius Glucocharge), as well as micronutrient-fortified beverages (e.g. Minute Maid Vitingo), at low prices. Moreover, they have an India-wide distribution approach whilst capturing the needs of low-income and rural groups.

*
Did not provide information to ATNI

Consuming a healthy and nutritious diet can be expensive, which requires healthy foods to be both made available and affordable, and adequately distributed, especially considering the needs of groups with lower socioeconomic status. In India, it is estimated that 22.5% of the population lives with less than US$1.90 (World Bank 2011, PPP) per day while the Indian Planning commission estimates that 21.9% of the population are poor and living below the national poverty line. At the same time, as of 2019, approximately one third of the Indian population lives in urban cities with some affluent groups having improved standards of living. This type of socioeconomic heterogeneity is visible in the variety of nutrition issues Indians face, where prevalence of overweight, obesity and diet-related diseases coexist with a high burden of undernutrition and micronutrient deficiencies, which further complicates the country’s nutrition challenges.

India has the sixth largest food and grocery market in the world, with retail contributing up to 70% of total sales. In 2019 around 90% of the Indian retail market was served by small corner stores (kirana) and other informal sellers such as street vendors, with only 8% by supermarkets and just 2% online. The food and beverage sector is the fifth largest manufacturing sector in India. The Ministry of Food Processing Industries expects the total value of the food and beverage segment in India to increase to US$1.142 trillion by 2025. As a result, a wide range of packaged foods and beverages are reaching Indian consumers from national and international companies, which offer them a range of convenience and staple foods. Lifestyle changes have also caused a shift in the habits of Indian consumers – from the consumption of traditional food to new food habits consisting of increased sugar, fat and salt. Worryingly, despite this increasing food availability, India ranks 94th among 107 countries on the Global Hunger Index 2020.

A study estimated that 63-76% of the rural poor could not afford the national recommended diet (based on the Food Based Dietary Guidelines for Indians) when compared against India’s wage data. Furthermore, in December 2019, India saw the worst consumer inflation since July 2014 at 7.35%, primarily due to high food prices. These issues indicate that there is a gap in affordability and access to healthy and nutritious foods and the food and beverage manufacturers, among other stakeholders, play a key role in closing the gap.

The Indian government has taken several actions to improve the country’s nutrition status, such as the flagship Poshan Abhiyaan program to improve nutritional outcomes for children, pregnant women and lactating mothers. The Food Safety and Standards Authority of India (FSSAI), with its existing and new regulations and guidance, the Eat Right India movement, etc., promotes safe and nutritious foods and raises awareness among consumers about healthy and fortified foods. Another government-led initiative is the Transformation of Aspirational Districts program, which ranks districts on several socioeconomic indicators, including health and nutrition, and aims to combat socioeconomic disparities between the most and least developed areas in India. The National Institution for Transforming India (NITI Aayog) has called for more participation from the private sector for the success of this program. Indian food and beverage companies, therefore, can look to these government-led initiatives for guidance in order to broaden the scope of their pricing and distribution efforts. Specifically, companies can incorporate the needs of aspirational districts in their overarching affordability and accessibility strategies. To support the Poshan Abhiyaan mission; the Eat Right India movement; and other government initiatives; as well as the nutritional needs of Indian consumers, more healthy, accessible and affordable products can and should be introduced to make a real difference.

How are the pricing and distribution of healthy products affected by the COVID-19 crisis in India?

The India Spotlight Index 2020 research did not include indicators to score and rank companies’ responses to the COVID-19. But ATNI did talk to companies about their initial coping strategies and responses to the pandemic between March and June 2020 and ATNI has been tracking publicly available information on industry’s response globally to the COVID-19 crisis, including in India, and reported on trends, best practices and areas of concern in separate reports. Read more about how companies can positively contribute to addressing the global nutrition challenges in ATNI’s COVID-19 Project.

Hindustan Unilever has developed an approach to improve the affordability of its healthy products using specifically defined price points, which ensures that products meeting its Highest Nutrition Standards (an in-house standard for defining its healthy products) are affordable for middle- and low-income groups. The company’s Living Standards Measure research and marketing tool is used to segment the Indian population into 18 sections based on their standard of living and disposable income. As part of the company’s innovation process, further research is conducted to evaluate pricing and purchase intention among people on low incomes. The company has also launched a cost-managing platform that allows it to minimize currency fluctuations or material inflation, thereby preventing it from passing extra costs onto consumers.

Further, Hindustan Unilever demonstrates a continued commitment to improving the accessibility of its healthy products through its Shakti project, which is an initiative to financially empower rural women and create livelihood opportunities. According to the latest figures, 100,000 Shakti entrepreneurs distribute Hindustan Unilever brands in many thousands of villages across 18 Indian states. The company provides training on basic accounting, sales, health and hygiene, and relevant IT skills. Entrepreneurs are also equipped with smartphones containing a mini ‘Enterprise Resource Package’ to help them run their business efficiently. The project provides a regular income stream for the Shakti entrepreneurs and their families. It focuses on making accessible products that meet Unilever’s Highest Nutrition Standards, which can help address micronutrient deficiencies in villages and rural communities that experience or are at high-risk of undernutrition and micronutrient deficiencies.

KMF Nandini’s milk distribution approach
KMF Nandini is the best performing India-headquartered company in this category, which can largely be attributed to the company’s distribution approach. While the company mainly operates in rural areas, and is oriented to stimulating rural incomes, dairy productivity, and rural employment, it also aims to supply good quality milk at lower prices to urban consumers in all area where the company operates. The company states its objectives, which include: “Achieve economies of scale to ensure maximum returns to the milk producers, at the same time facilitate wholesome milk at reasonable price to urban consumers.”

The company also shared evidence of building a strong network to increase milk product sales by opening depots within and outside Karnataka State. It has 14 milk unions, covering all districts, which procure milk from Primary Dairy Cooperative Societies (DCS) to distribute milk to consumers across towns, cities and rural areas in Karnataka.

Mother Dairy has undertaken several initiatives to improve affordability of its healthy and fortified milk. For instance, since implementing its approach to fortify all milk products in the National Capital Region (NCR), Mother Dairy has maintained the low price of milk products, making it especially relevant considering the food consumption and expenditure among Indian consumers. The company sells bulk-vended milk fortified with Vitamin A and, since 2016, with Vitamin D in the NCR. Furthermore, Mother Dairy’s horticulture products, such as fruits and vegetables directly sourced from farmers, are sold all year long in the company’s own retail outlets at lower price points. Mother Dairy also sells fortified edible oil products under the brand name Dhara in smaller stock keeping units of 200 ml each at low prices.

What commitments, policies and strategies have companies defined to improve the affordability of their healthy products and products that intend to address undernutrition and micronutrient deficiencies (e.g. fortified products)? 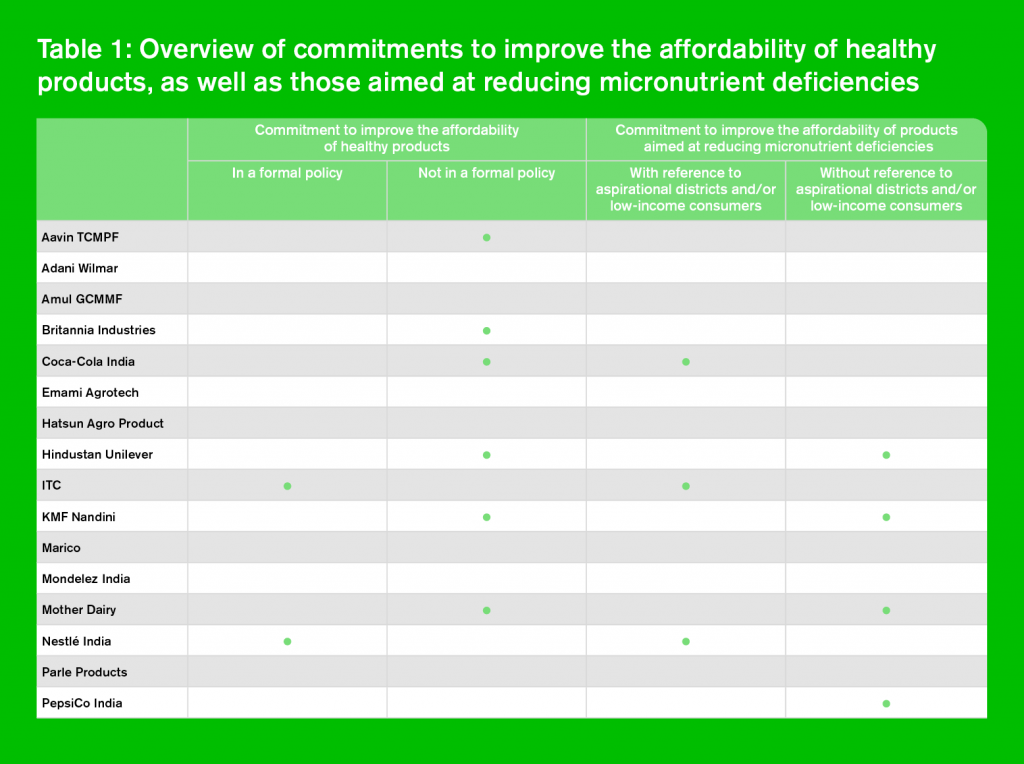 What commitments, policies and strategies have companies defined to improve the physical accessibility of their healthy products and products that intend to address undernutrition and micronutrient deficiencies?

Is there evidence that Indian companies have improved the physical accessibility of healthy products for all consumers including groups that lack access due to geographical factors, e.g. isolated rural areas or urban slums? 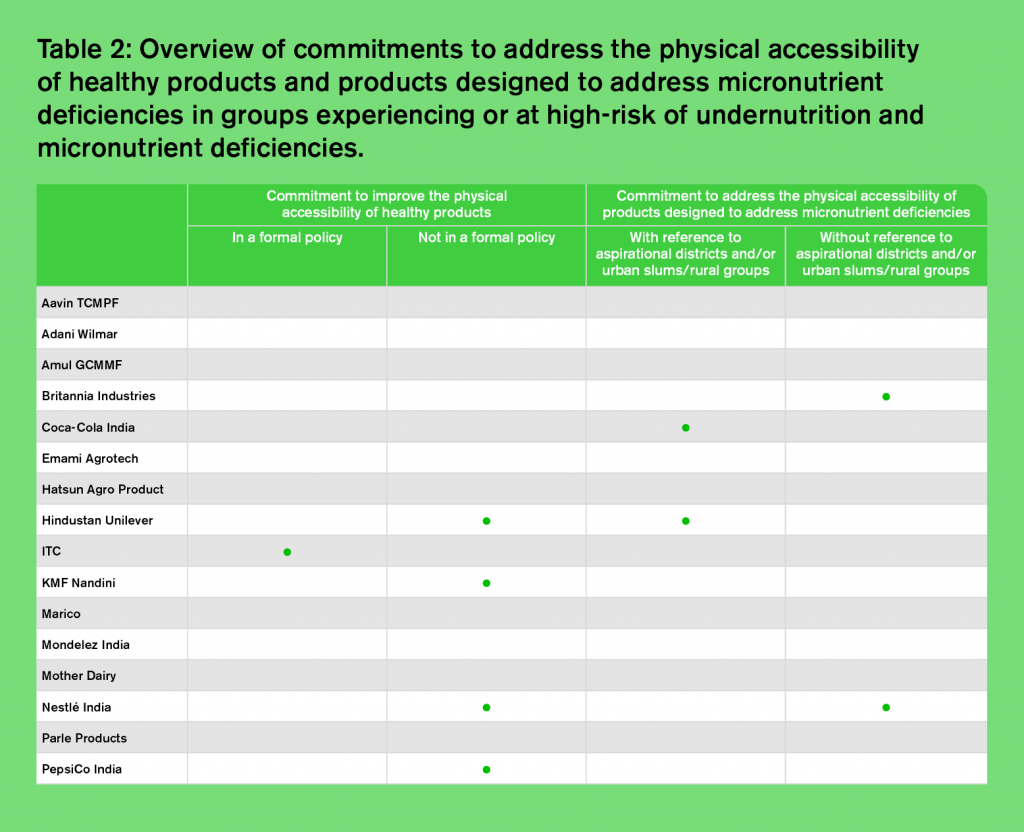 Is there evidence that Indian companies have improved the physical accessibility of products that address undernutrition and micronutrient deficiencies?

To improve and accelerate their efforts towards affordable and accessible healthy products, food and beverage manufacturers in India are encouraged to: